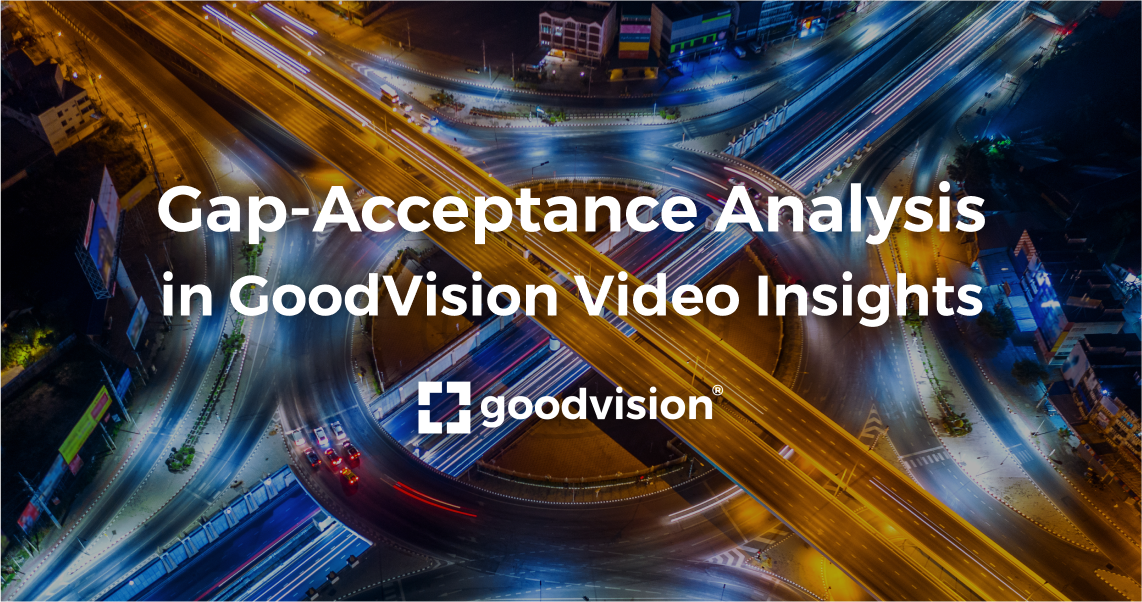 Travel efficiency and traffic safety of non-signalized intersections are the main objectives considered in traffic management and control. Most intersections in cities are controlled by signal lights, no matter what level of traffic volume there is. Even if it may increase safety, it obviously decreases the efficiency of the throughput. On the other hand, there are intersections that have no control which leave the decision of safety and efficiency to drivers themselves. This may cause severe safety and congestion issues.

Long story short, intersection is efficient if the vehicles from minor streams have a chance — a gap big enough to slip into the major stream without causing an incident or a unnecessary delay in both streams.

This article provides a quick step by step guide and a free-downloadable Excel tool to perform the gap acceptance analysis quickly and easily.

Measuring vehicle delay is of great significance for evaluating the intersection service level. However, delay itself can be just a consequence of vehicle gaps on both major and minor streams. While small gaps on major streams cause bigger delays of traffic on minor streams, small gaps on minor streams cause even bigger queue length there. When combined, it drastically decreases the level of service and most often leads to the recommendation that intersection should be signal-controlled.

Let’s go step by step with the analysis of traffic delay on the exemplary non-signalised roundabout. For the purposes of the tutorial, I am using GoodVision Video Insights traffic analytics platform (my.goodvisionlive.com). Traffic in the location below was captured using a fixed traffic camera and traffic data was collected from video footage using GoodVision Video Insights video analytics. 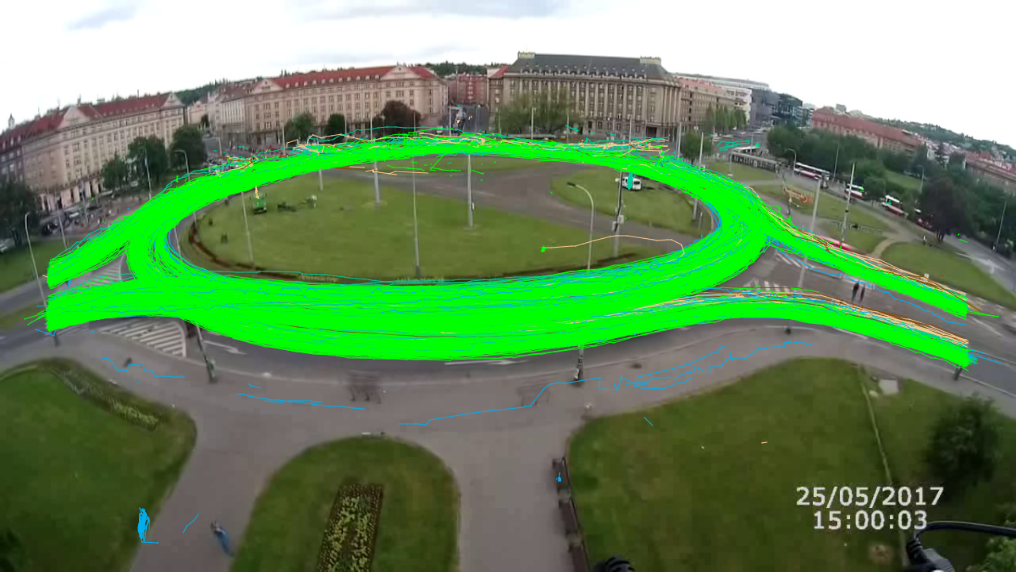 2. Defining the traffic movements for the analysis

In this guide, we will analyse critical gaps on WEST and SOUTH entries to the roundabout. These traffic movements will be considered as MINOR traffic streams, that give priority. The MAJOR stream is the main stream of vehicles with priority, inside the roundabout.
A) Creating a MINOR stream movement

Draw a virtual line to the place, where cars from minor stream are discharging into the roundabout. When they pass this point, it is considered that they merged with the MAJOR stream. Let’s label these line as WEST IN, SOUTH IN respectively.

Draw a second virtual line to the place, where cars are approaching the “waiting zone”. When they pass this point, it is considered that they are waiting for a gap to be accepted. Let’s label these lines as WEST WAITING, SOUTH WAITING respectively.

Draw a virtual line to positions on the major traffic stream, where cars are passing by the minor stream entries into the roundabout. This will give us very precise time-stamps of cars passing by and not giving priority to minor stream cars. Let’s label these lines as MAJOR WEST, MAJOR SOUTH respectively.

See the desired configuration below: 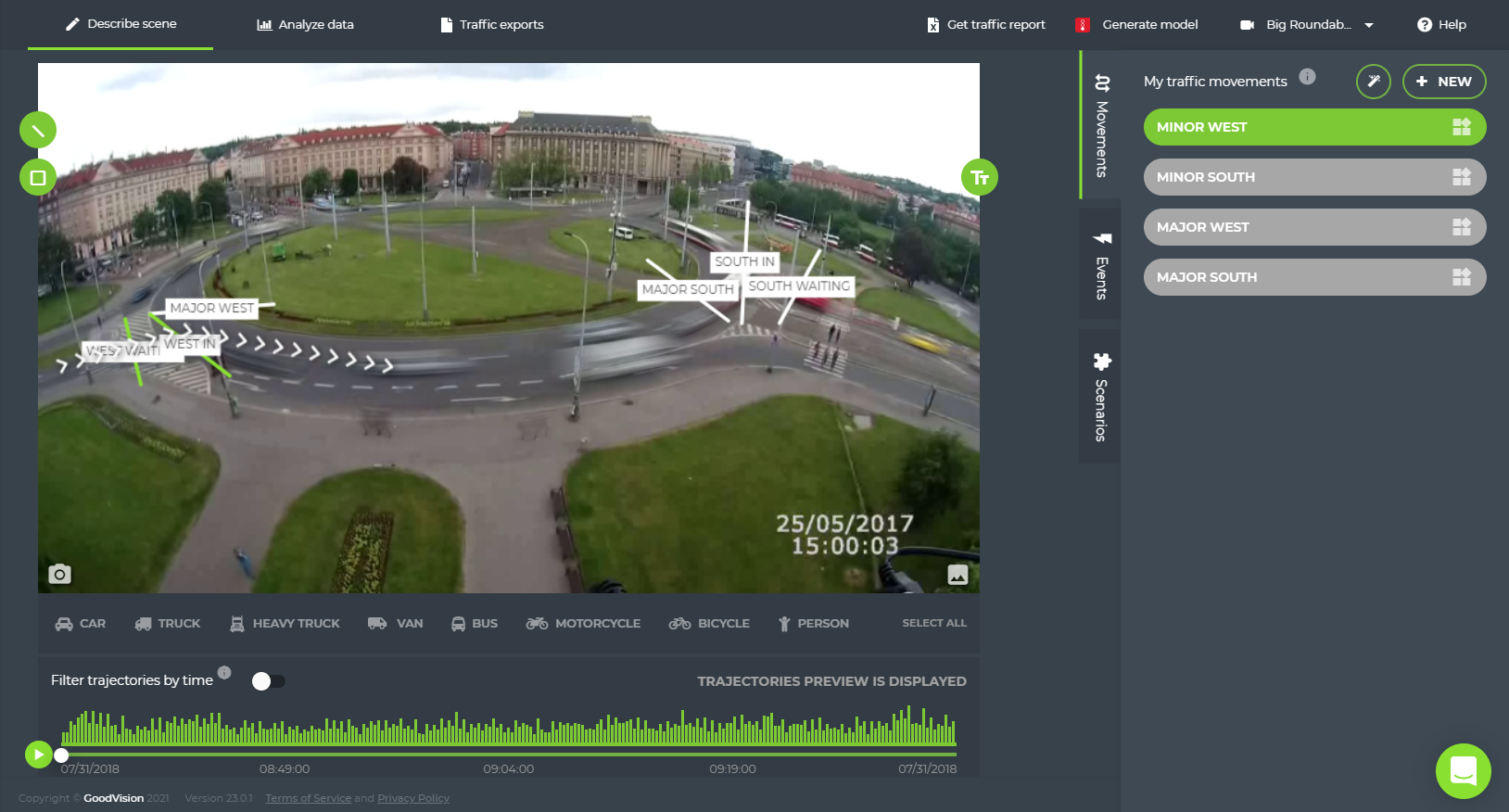 3. Getting the detailed lists of vehicle passages

To obtain the full list of vehicle passages on each of the movements, simply create a Vehicle List report and select these movements. Your report will be ready in a matter of seconds. Read about vehicle list report on GoodVision help portal.

See the example below: 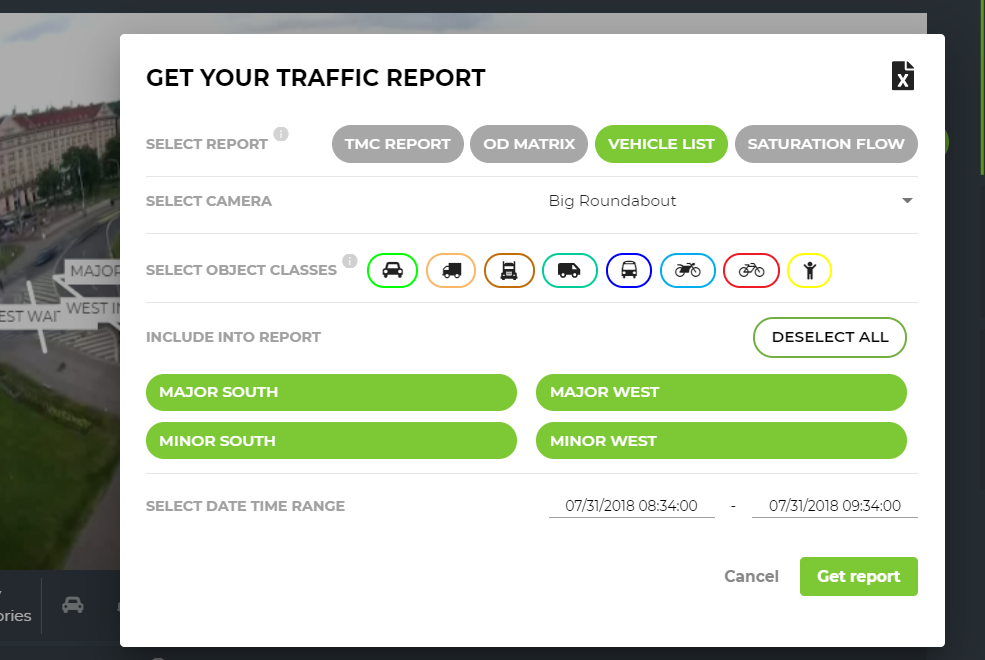 Sample report is on the image below: 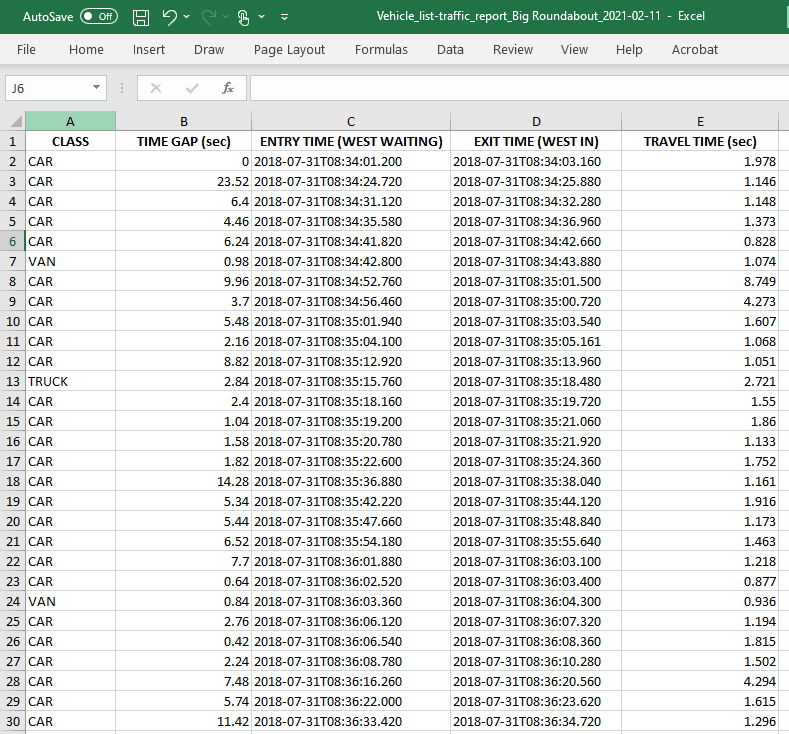 Gap acceptance analysis is fully automated in GoodVision Video Insights and the user is provided with the detailed report straight away.

How to do it step by step:

4. Now copy and paste the required * columns from the MINOR WEST sheet of the vehicle list report to corresponding columns (ENTRY TIME and EXIT TIME) of the MINOR STREAM sheet in the Gap Acceptance Report.

5. All done. Now you can see the results of the gap acceptance analysis on the sheet called GAP ANALYSIS. Repeat for the SOUTH, or any other movement.

Here is the explanation of the parameters it provides:

I hope you enjoyed this guide. It can save you long hours of manual gap analysis on your traffic projects. Feel free to reach out to us for help at support@goodvisionlive.com

3 Steps To Make Your Next Traffic Survey Project Extraordinary

Saturation Flow, Bicycles and E-scooters - Rethinking the Concept of PCU